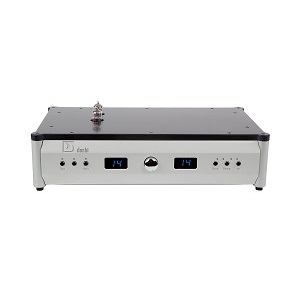 The Doshi philosophy can be expressed in one word: balance. A balance of classical and cutting-edge technologies,

of eastern and western sensibilities, of professional and residential design strengths.

Nowhere is this sense of balance more evident than in the Doshi 3.0 Line Preamplifier.

for the recording industry. Based upon legendary studio hardware including Pultec EQs and Universal Audio Compressors,

Doshi has developed a transformer-coupled volume control, a technology which helps our Line Preamplifier

thereby eliminating the possibility of ground loops at input or output, and assures absolute freedom from ground noise:

To meet Doshi’s mandate of design simplicity, we employ a single gain stage, with one ECC99 Dual-Triode Vacuum Tube per channel:

the first triode provides gain while the second is used as a “Follower” to minimize output impedance.

low output impedance and can drive any cable and amplifier load.

The Doshi Linestage includes four differential inputs, each of which can be outfitted with XLR or RCA connectors,

tailored to its owner’s needs (Two XLR and Two RCA are Standard).  Inputs are relay-switched into a transformer

Two sets of differential isolated outputs—also specified as RCA or

XLR to the customer’s desires— and a 12V on/off Trigger complete this preamp’s comprehensive connectivity.

Naturally, all functions of the Doshi Line Preamplifier have been placed under the control of an elegantly styled,

technology to virtually eliminate the influence of both external and internal resonances upon our circuits’ performance.

Inside the chassis, critical audio circuits are point-to-point wired and mounted on an acoustically isolated sub-chassis.

The entire chassis is suspended from a ½“ thick slab of laser-cut, DuPont Corian which, in turn,

floats upon four vibration absorbing feet that are mechanically decoupled from the chassis.

While our competitors build their enclosures from mild steel and aluminum,

Doshi uses extremely strong 14 gauge stainless steel to create a chassis that is mechanically and electrically inert; as a result,

our components provide an ideal foundation for performance.

As befits a state-of-the-art product, the Doshi Line Preamplifier includes an oversized power supply housed in a discrete,

resonance-controlled chassis. Connected to the Preamplifier via a custom made cable, designed to

this transformer has been massively over-specified to prevent resonances that occur when a transformer is run at full capacity.

The Doshi Line Preamplifier represents the highest level of performance ever achieved in an audio linestage.

The product of timeless circuit designs, executed with the finest component parts and uncompromising build quality, 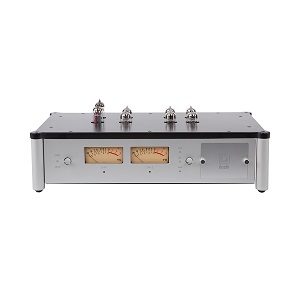