Studer is a formerly Swiss designer and manufacturer of audio equipment for recording studios and broadcasters.
In 1949, Studer branched out into the audio business by modifying imported tape recorders from the United States.
By 1950, they had developed their own line of tape recorders, named the Dynavox series.
The company has built a variety of 2-track recorder models throughout its history for stereo recording.
Several Studer components were sold under the Revox name, with slight modifications, at a lower price.
The Revox variants were designed for consumer use, with features such as IR remote control, and the omission of balanced input/output sockets.
Studer designed and produced multitrack recorders. Studer’s first multi-track machine, the model J37, was released in 1964.
It recorded 4 tracks on one inch tape.
A pair of J37s were used by The Beatles to record Sgt. Pepper’s Lonely Hearts Club Band in 1967.
Later analog Studer machines were built in 8, 16 & 24-track configurations using tape widths of up to two inches.
The most famous Studer recorders in the history are C-37, A-80, A-810, A-812, A-820. 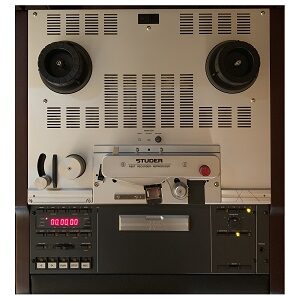